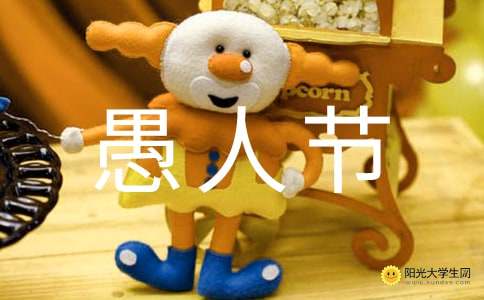 April Fool's Day is traditionally a day to play practical jokes on others, send people on fool's errands, and fool the unsuspecting. No one knows how this holiday began but it was thought to have originated in France.

The closest point in time that can be identified as the beginning of this tradition was in 1582, in France. New Year's was celebrated on March 25 and celebrations lasted until April 1st. When New Year's Day as changed from March 25 to January 1st in the mid-1560's by King Charles IX, there were some people who still celebrated it on April 1st and those people were called April Fools.

Pranks performed on April Fool's Day range from the simple, （such as saying, "Your shoe's untied!）， to the elaborate. Setting a roommate's alarm clock back an hour is a common gag. The news media even gets involved. For instance, a British short film once shown on April Fool's Day was a fairly detailed documentary about "spaghetti farmers" and how they harvest their crop from the spaghetti trees. Whatever the prank, the trickster usually ends it by yelling to his victim, "April Fool!"

April Fool's Day is a "for-fun-only" observance. Nobody is expected to buy gifts or to take their "significant other" out to eat in a fancy restaurant. Nobody gets off work or school. It's simply a fun little holiday, but a holiday on which one must remain forever vigilant, for he may be the next April Fool!

In England, tricks can be played only in the morning. If a trick is played on you, you are a "noodle". In Scotland, April Fools Day is 48 hours long and you are called an "April Gowk", which is another name for a cuckoo bird. The second day in Scotland's April Fool's is called Taily Day and is dedicated to pranks involving the buttocks. Taily Day's gift to posterior posterity is the still-hilarious "Kick Me" sign.

Nowadays, there appears a phenomenon that the western customs are spreading into the east countries step by step, thus making many inhabitants who live in big cities enjoy themselves on these western festivals such as Christmas Day, April Fool’s Day, etc. Such phenomenon shows us that the world people are getting close gradually and the world is becoming smaller and smaller as well. Therefore, in my opinion, it’s a normal phenomenon s well as a necessary trend.

First of all, it shows that we Chinese have become much opener rather than clinging to some very old customs, which are opposite our living. Looking back on the history, we can find the answer to why our China was very poor and weak in the 1800’s. Yes, the answer is that we closed ourselves not to let other countries know about us, and this led us to a very hard road on which we suffered many wars that many European countries launched. So I think it is more than necessary to accept other customs instead of closing ourselves. Of course, festivals are just the beginning.

What’s more, the Open and Reform Policy results in this. So I want to say it is a great achievement for the policy. Since we took the policy into practice, our country is developing with a rapid speed. No doubt it is an essential trend.

Last but not the least, we may get closer and closer not only to our home friends but also to many foreigners. We can never feel embarrassed for not knowing the other’s customs and manners. And more misunderstandings can be avoided as well.

To sum up, the trend has its great advantage to a certain extent. However, if we admire the western customs too much, it will be a disadvantage because China is our own country, all of us should enjoy a patriotic heart. Wish in the near future, we can see the situation that westerners are enjoying themselves on the Spring Festival.